In search of a day care center for the needy

In search of a day care center for the needy

The Association Adintre in Fuengirola, which helps homeless people, has a premises but needs 70,000 euros and the municipal license 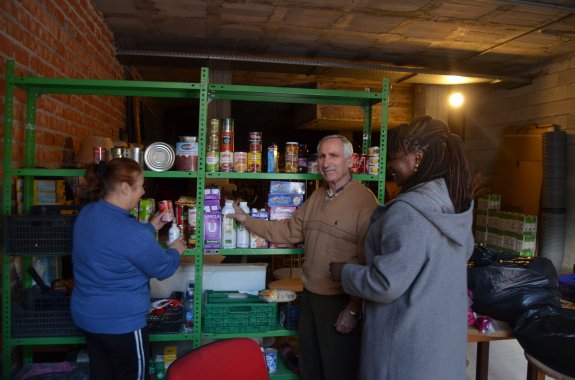 The Association Adintre in Fuengirola, which helps nearly 400 people including children, the elderly, mistreated women, the evicted and, above all, homeless people (66 in the municipality) through 80 volunteers, wants to create a Day Centre to welcome them. For this, it has a rented premises of 260 meters in the Feria de Jerez street, between Fuengirola Television and the Juan Gómez ‘Juanito’ sports pavilion, at the end of the Villa Blanca fairground.

However, they need «70,000 euros and the municipal license», according to the president, Ghanaian, Joyce Gyimah, for which they ask for help from both the City of Fuengirola and individuals, companies and institutions to achieve it.

«Opening the Day Centre is our main goal. We want to install four showers, a clothing store, a kitchen, a social dining room and two offices to help them with psychological help and rescue them from the street. We have already presented the project to the Town Hall,»says Gyimah.

Adintre started its work in 2001, although it was not established as an Association until 2009. The president recalls that in 2001 «I was going down the street looking for homeless people, I talked to them and bought many menus for 550 pesetas (3.30 euros ) at the Center King, the only restaurant that would host them. I am a Christian, I preached the Word of God to them and that’s how it all began. Even today I cook for those who are worse off and take food to certain areas of Fuengirola,» explains Gyimah.

Next to the headquarters they have two other premises of 300 meters each, the first one used as a food store and for

donated clothes, and the second, which they hope to turn into a handicrafts workshop for the homeless. The three premises are rented from Acinipo, a real estate agent dependent on Unicaja, at a reduced rent, one of which is linked to the Evangelical Church.

«We have no institutional financial aid. The income comes through my husband, Howard Thomas, who is director of British School of Cordoba, who contributes 1,000 euros per month, as well as anonymous people. The food is donated by companies such as Primark, The Ark School in Fuengirola and the Hindu community of Benalmádena. The Don Pablo Hotel in Torremolinos has given us furniture. Last November 19, Adintre received a prize of 3,000 euros by the VA Foundation for our charity work,» says the President.

Luis Carretero, a psychologist who cares for people who are mistreated and the homeless on a Thursday and who helps on Tuesdays to find funding through written requests, explains that «we pass data about our users to the Social Services at the Town Council so that there is no duplicity of aid, since there have been some cases, although few. I receive families and study their needs.»

The Social Services Councillor, Francisco José Martín, confirms the coordination between Adintre and the Town Council, while adding that «we are very happy with the work they do. The Council provides them with a space in the Saturday market free of charge for the collection of funds. Only the technical assessment is needed to be awarded a grant of 1,200 euros that they have asked for».

The worst moment was three years ago, when Joyce Gyimah was left almost without volunteers, as a result of leaving the previous premises of 30 square meters they had in Las Rampas. The cook of that time, Ana Peinado, remembers that they gave «62 meals, that we distributed in the street to the destitute and homeless. Now I organise the clothes. At Christmas we sell goods in the Plaza de la Constitución and we organise raffles. We turn money into meals. We need that day centre a lot.»